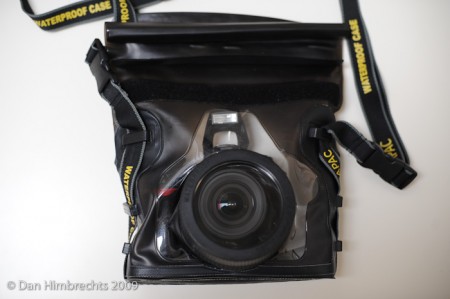 As I mentioned in my previous post I picked up a cheap $149 AUD underwater housing before I went on holiday to Fiji. I figured it would be cool to play around with some shots in the water and I knew that being a hell of a lot cheaper than a ‘proper’ DSLR underwater housing there would be limitations, and perhaps even disaster.
I wasn’t taking any chances, so I loaded up the Dicapac WP-S10 with my old Nikon D200, the bag clearly accommodates an assortment of DSLR types and sizes but I found a camera the size of the D200 with the battery grip taken off was about the biggest camera you’d get in the bag comfortably. You wouldn’t do it anyway, but the D3/D2x size bodies have too much bulk between the bottom of the camera and the lens, therefore not fitting into the lens port on the housing correctly. I would imagine that this bag would fit any of the Canon and Nikon bodies except for the “pro” bodies (1DmkII,III etc and D2x/D3 etc) Basically anything that doesn’t have a bulky battery grip will fit in this thing. I thought that it would be fun to use this for some snorkelling and also found it was great to use in times that I would never take a camera, such as sailing and even just playing around in the pool.

The usability was something I knew from the start would be tricky. The housing has a plastic finger sleeve on the right hand side so you can access the shutter release button and with a bit of playing around you can also control the front command dial. There are also two finger holes in the lens port that are accessible when the port is extended that I assume are for the zoom ring of a zoom lens. I got a Nikkor 17-55mm 2.8 DX lens into this port to see if it would fit and found even when it was dry I could not zoom. There is not enough movement with these finger sleeves to turn a focus or a zoom ring. To operate the camera underwater I figured aperture priority would be best as I could still access the front command dial and would be able to switch apertures to get my desired DOF and shutter speeds. I also used the back AF-On button for focusing (it’s how I focus all my cameras anyhow, but in this case using the half-press shutter button technique would be difficult because the plastic finger sleeve tends makes it hard to feel the balance of the shutter release button with your finger).

The lens port is a bit of a funny design and because it is made of rubber and extends to accommodate different lens types and focal lengths, it doesn’t stay in place very well.
My lens of choice was a 20mm 2.8, I wanted to get the fisheye in there for maximum wide angle coverage but there was just too much vignetting from the front ring of the lens port. Because the 20mm is fairly short in length the front port tended to move around a bit and if you aren’t careful vignetting can occur easily as the front part of the port moves out of alignment with the lens. I found that by holding the front port while I was composing a shot worked, but next time I might try some other way of securing it, maybe with gaffer tape or something similar. As I mentioned earlier I got a 17-55mm 2.8 DX Nikkor in there and it filled the extended port nicely. The front element of the lens port is 85mm in diameter and the port extends to 15cm. The 17-55 is a bulky lens and roughly the same length as the 24-70 2.8, (I don’t know if I’d be putting a $2000 lens in this thing though!) so I imagine that would be the biggest lens you’d get in the housing. I think most people who would use this would probably want to stay at the wide end anyway.

Image quality was surprisingly good, the front element is made of UV coated polycarbonate and expected it would scratch easily, although after giving it a battering it still looks perfect! The clarity and colour of the images seemed to be as though it wasn’t there at all, so I suppose in a way it is just like shooting through a cheapish UV filter.
The housing comes with a strap and during one snorkelling dive I pretty much just had the camera strapped over my shoulder and swam with it trailing me in the water. It floats pretty good even with a heavy-ish camera like the D200 inside. The instructions say it’s waterproof to 5 metres and I got it down to probably only two metres, but not once in all the times I took it out did it get even a drop of water inside, it does seem to be a lot better than it looks! Inside the box there are also a number of foam inserts which you can use to customise the interior to give your model of camera a snug fit. The manufacturer’s website is here (although doesn’t give a great deal of info, I think most is lost in the Korean to English translation) and the shop where I first saw this thing is here

In conclusion I reckon this is great for the photographer who doesn’t do a lot of water work, but could use this for the odd portrait or even just for some different and fun holiday snaps like I did. $149 bucks. Thanks Korea! 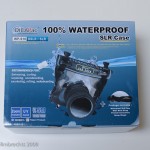 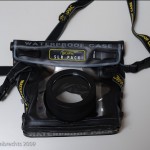 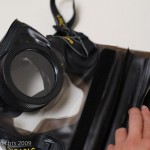 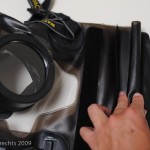 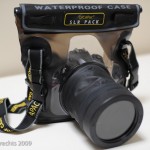 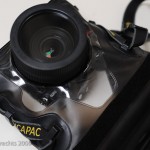 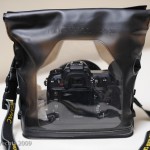 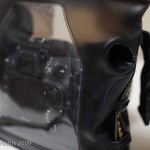 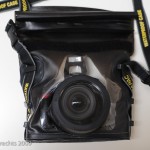 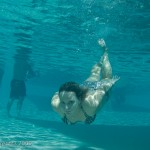 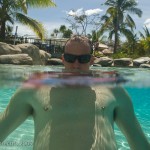 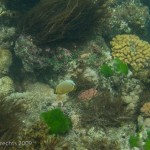