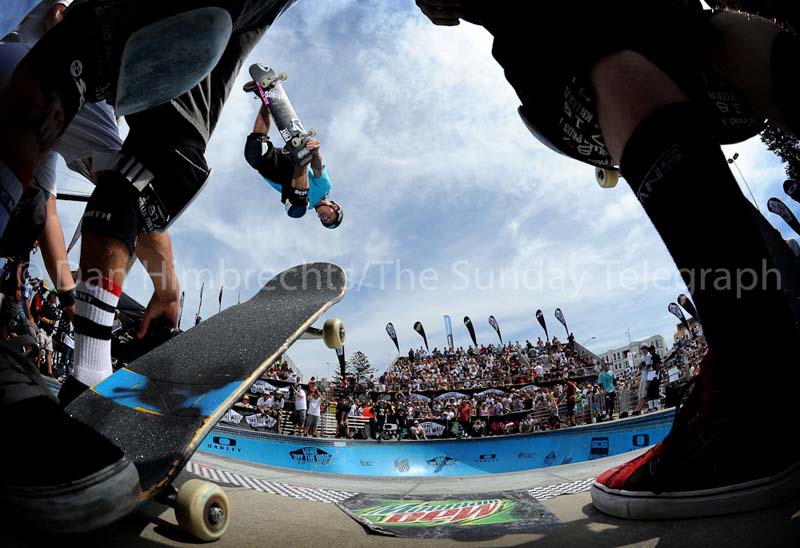 Jurgen Horwaath is pictured through the legs of other competitors, launching out of Bondi Bowl during a heat of the annual Vans Bowl-A-Rama skateboarding contest, at Bondi Beach. Pic: Dan Himbrechts

A while back I was assigned to shoot the annual Bondi Bowl-A-Rama skateboarding contest, for The Sunday Telegraph. As skateboarding was what got me into photography back in my teen years, it seemed like I had come full circle by being back on the deck of a bowl with my fisheye lens photographing skateboarding – but this time for a major newspaper.
My brief was to go down and shoot some nice pictures as part of a day in the life of Sydney, although I was told by my picture editor that they weren’t holding space for it. (action sports still struggle for space in major mainstream newspapers – even surfing, which is such a huge sport in Australia)
Competitions like this are always hard to shoot.before the competition they had me check out these helmets for my protection during the games, and they can be use for almost everything passes are handed out to seemingly anyone with a DSLR, and add to that the endless line of filmers and lurkers and you have yourself one crowded skate bowl with particularly ugly backgrounds. i.e other cameras and flashes.
I decided to just have a bit of fun with it, and was super happy with this image, which I managed to nab just before I had to head back to the car to file the shots back to the paper.
The good news – they ran a fairly large picture of the comp. The bad – it was a bail! Oh well, can’t win